Disclaimer: We're just two fans who are really excited about the work of Lance Hart. We don't profit in any way from the sales of his clips, nor do we have any creative power regarding his work. Except for the power of fandom, of course... 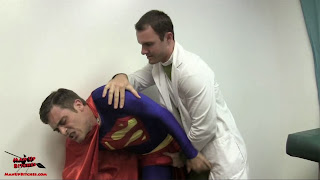 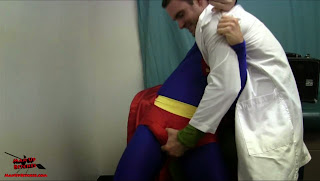 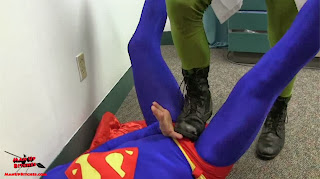 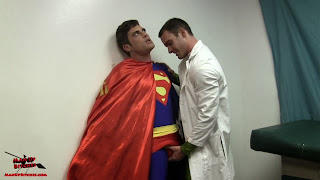 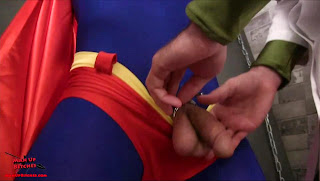 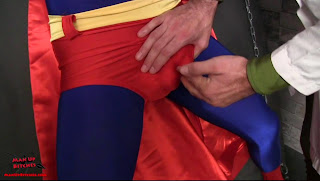 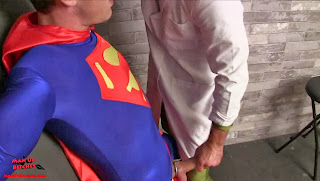 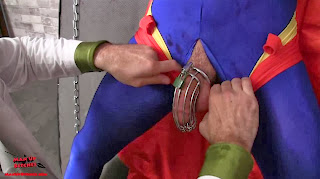 Plot:
The Man Up! guys are back with a ballbusting clip - and what a great clip this one is! Lance Hart stars as Superman who encounters his arch-enemy Dr. Kincade at the evil doctor's practice. The doctor tries to fight him off with a couple of well-placed knees to his bulging crotch that make his junk bounce up and down - but Superman just shrugs them off. After all, he is the Man of Steel, and apparently that applies to his babymakers as well... But evil Dr. Kincade has an ace up his sleeve: A tiny portion of Kryptonite. Not enough to kill our favourite superhero - but enough to subdue him.

Dr. Kincade treats Superman to a couple of knees and punches before he violently squeezes Superman's juicy meatballs. We get a great look at his bulging privates as they are kneaded between the kinky doctor's fingers. The ensuing fight includes vicious squeezes, slaps and punches. "Your balls are mine, Superman!" the doctor sneers before Superman leg-scissors him almost into unconciousness. But the doctor manages to get the upper hand, squishing and squeezing Superman's nads, and bringing him down with a couple of well-placed knees and stomps to his weakened genitals.

"What a joke", the doctor laughs, as he squishes and squashes, kneads, twists and slaps Superman's nuggets with his bare hand. Finally, Dr. Kincade makes Superman pass out from all the Kryptonite. Superman wakes up chained to the wall in Dr. Kincade's secret lair - and this is where the action really gets going...

Dr. Kincade presents our hapless superhero with a Kryptonite Cock Ring. Oh, the evil doctor is up to no good! He yanks Superman's impressive cock and his juicy balls out of his uniform, and pushes them through the ring (Dr. Kincade: "How does that feel?" - Superman: "Not so super..."). Let us tell you: Superman's naked, exposed junk is a sight for sore eyes - and as far as sore bodyparts go, those big suckers are in for a treat...


Dr. Kincade continues kicking and kneeing Superman's balls which are kept front and center inside his spandex by the cock ring. The squeezes are what hurts poor Superman the most - and they look fabulous in close-up! We see his nuts bulge between the doctor's fingers, and his cock grow harder and harder... It makes for rather a fascinating visual as his prominent bulge (with his cock and his nuts perfectly outlined in the red spandex) bounces from kicks and slaps and bulges between the squeezing fingers as the doctor continues to abuse Supermen's most prized possessions.

The doctor continues to yank, flick, slap, squeeze and stomp Superman's balls before he starts with phase two of his vicious plan: "I want your seed!" Dr. Kincade wants Supermans superspunk to create an army for himself. Oh, poor Superman. The evil doctor strokes Superman's hard supercock , throwing in some squeezes, slaps and punches while our hapless superhero's cock is hard as a rock. Finally, the doctor coaxes out a nice, big batch of creamy supersperm. Superman is defeated, his cock dripping with cum - but the doctor isn't finished. He chuckles as he locks Superman's cock into a metal Kryptonite chastity cage ("I don't want you wasting your seed for anybody else to create an army of their own..."), leaving him spent and sore and chained to the wall...

And we can't wait to see the sequel...

Things to watch out for:
1. Two more minutes... After almost six minutes of fighting and getting his balls busted, Superman breaks character and asks the cameraman "How long is it?" He doesn't look too happy at the prospect of emduring two more minutes of ballbashing to complete the first part - and we can't blame him. His balls really suffer in this clip, but he takes it like a (Super)man.

2. Wiggling junk. The Superman costume is perfect, allowing Lance's ample junk just enough room to wiggle and bounce with every blow and squeeze while being tight enough to outline his balls and his dick for us to enjoy. Hooray for the costume makers!

3. Ready for your close-up, superman? There are tons of juicy close-ups of Lance's genitalia getting abused, but the best one has to be at 16:12 when Cameron singles out Lance's nuts and gives each of them the attention they deserve. Ouch!

Bottom line:
Let's hope nobody saves Superman so we get a brutal, juicy sequel...

Rating:
5/5 nuts - with a spunky batch of delicious superhero cream. 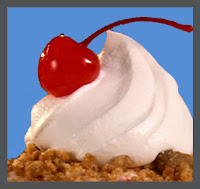 Get the clip now from Lance’s Man Up clip store:

This clips is also available in two parts:
Part 1
Part 2
Posted by Alex at 2:53 PM 2 comments

It's been more than a year since we started this blog to celebrate the work of Lance Hart, fetish enthusiast and mastermind behind the Man Up! clip store. His studio broke new ground when he started producing high-quality male-on-male ballbusting clips with insanely hot guys and fierce action.

We have written more than 150 blog posts over the course of the last twelve months, and we enjoyed sharing our enthusiasm for Lance's work with you. When we started in February 2012 we never imagined that this blog would be so popular...


You have probably noticed that in the last couple of months the updates have taken more time, sometimes there were a couple of weeks before we published a review after the clip had been added to Lance's site. It's not that we have become lazy - it's just that there have been a couple of changes in our personal lives that  made finding the time to write more difficult. Our day jobs have taken up more and more of our time, and we feel that it's gotten increasingly hard to do justice to Lance's phenomenal work.

So we have decided to take a break. Maybe we'll write a review now and then, but we can't carry on reviewing every clip that Lance published.

We'll stay fans of his work, and we hope you will, too! Thank you for your support!

And now go and see Lance's newest adventures at Man Up!

The polls are closed, the votes are counted! Thanks to everyone who voted for their favorite model for the month of January. And without further ado, here are the results:

Congratulations, Jake! We're glad you are back and we hope you'll team up with Lance again, soon!


And to celebrate Jake's victory, here are a couple of Jake's most recent clips:


Ballbusting In The Streets
Read our review.
Get the clip now from lance's Man Up! clip store.


Mutual Foot Worship Jake And Cameron
Read our review.
Get the clip now from lance's Man Up! clip store.

Wanna play with Man Up?

Lance is always looking for new models. Interested? Send a mail with face and body pics to todd@instinctdrivenmedia.com

There are five rules (though it's much more fun to watch Lance explain them to you in his hot video with Derek here):

1. You have to be 18 years or older (and have 2 kinds of government ID to prove it, one of them with a picture).
2. You have to be willing to show your face. Lance doesn't like masks. And, frankly, we don't either...
3. A nice body is a big plus.
4. You should to be able to come to Tampa, FL, where the shooting takes place.
5. Acting skills are always helpful - but, you know, Lance will know how to hit the right spots to make you give a performance worthy of an Oscar...

We're sure you'll have a great time - and maybe we'll be reviewing your clip here soon...